In the field of seismology, seismic zones are, areas divided based on the frequency and intensity of expected earthquake. Indian subcontinent comprises of four seismic zones those are- II, III, IV and V. These zones are categorized based on scientific research related to seismicity and earthquake occurrence in the past years.

Earlier India was divided into five zones, but then, The Bureau of Indian Standards [IS 1893 (Part I):2002] decided to group the country into four seismic zones, where, the first and second zone being unified.

Seismic Zone II: This is the area that suffers least damage of the other three zones. Intensity of earthquake lies between intensities V to VI of MM scale (MM ? Modified Mercalli Intensity scale).

Zone II covers those areas which are not covered by the other zones listed below.

Seismic Zone V: Zone V is the most active region of the three. Historically this region has faced some of most devastating earthquakes. Magnitude here exceeds 7.0 and had intensities higher than IX. It comprises part of North Bihar, Andaman and Nicobar Islands, Rann of Kutch in Gujarat, parts of Jammu and Kashmir, Uttaranchal and entire northeastern India.

Seismic Zones with intensity in Indian Subcontinent of the Map 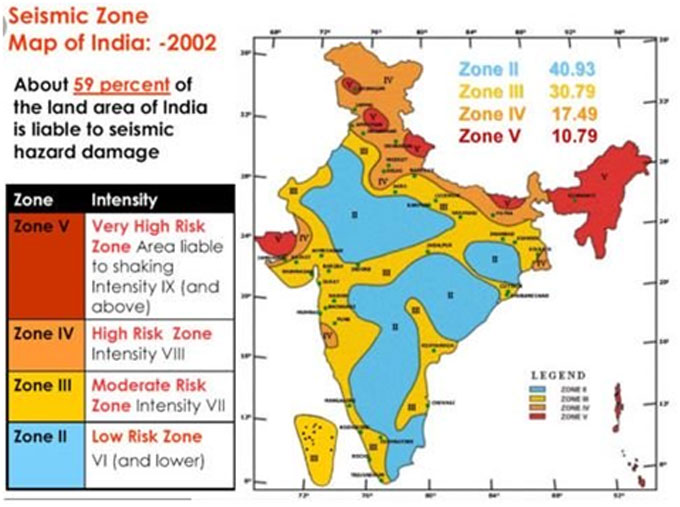