What do you understand by Sewer pipes and what are their Varieties?

Waste materials are disposed of through sewer pipes. Different types of sewer pipes are available in different sizes and materials.

It is the primary function of sewer pipes to transport the sewage and wastewater produced by homes and commercial buildings to the drainage system that is used to treat and remove the waste. In the course of time, sewage pipes can become damaged or decayed, requiring repair or replacement as a result.

In most cases, sewer pipes are made of concrete, which is known for its durability. Their lifespan usually exceeds 30 years, and they are rust-proof as well.

Despite their higher cost, plastic pipes are considered the future of sewer pipes. Due to their eco-friendliness and cost-effectiveness, plastic pipes are becoming more popular. These types of piping systems have been discussed here in some detail.

Solid waste is transported by several types of sewer pipes, but many of them are not used at the moment because they are inefficient and do not last.

There are two types of sewer pipes that are most commonly used in homes: PVC and ABS pipes. In addition to being lightweight, flexible, and easy to cut according to the needs, these pipes also come in a variety of sizes.

The diameter ranges from 1/2 to 4 inches, and it comes in white and grey colours. Due to its smooth interior and exterior, it is resistant to tree roots as well as other harmful materials. The use of PVC pipes is also convenient and inexpensive.

There is a particular type of sewer pipe that is commonly used in older homes. There are many benefits to having sewer pipes made of cast iron since they possess an incredible amount of strength compared to other sewer pipes.

In comparison to ABS, PVC, and clay pipes, cast-iron pipes have the potential to withstand 2 tons of pressure per linear foot.

In addition to concrete pipes, there are other types of sewer pipes as well. Despite the fact that it is relatively durable, it is also prone to cracking and ageing as it ages. However, most of the time it can be an inexpensive option.

There are several types of sewer pipes but the most common one is clay sewer pipes. The clay-shale mixtures used to build these are capable of moving most wastes and are made from a mix of clay and shale.

Their inert nature means that they can not catch fire. Despite being rust-proof, clay pipes are not as strong as reinforced concrete pipes. Under immense pressure, these pipes can crack, but they are the least expensive. Since more advanced and efficient material pipes are available nowadays, they are rarely used and hard to find.

Bituminized Orangeburg pipes are composed of layers of compressed fibers bound together with a water-resistant adhesive impregnated with liquefied coal tar pitch.

In the 1860s and 1970s, it was widely used for water supply until it was replaced with PVC pipes for drainage and waste venting (DWV).

As a result of its lightweight, this type of pipe is often preferred by plumbers in the plumbing system. Furthermore, these pipes can be cut to any size with a standard wood saw.

Since galvanized pipes are made by an intricate method, they can be a bit more expensive than the other types of drain pipes, but on the other hand, they can be used almost anywhere in your home and they can last for a long time. 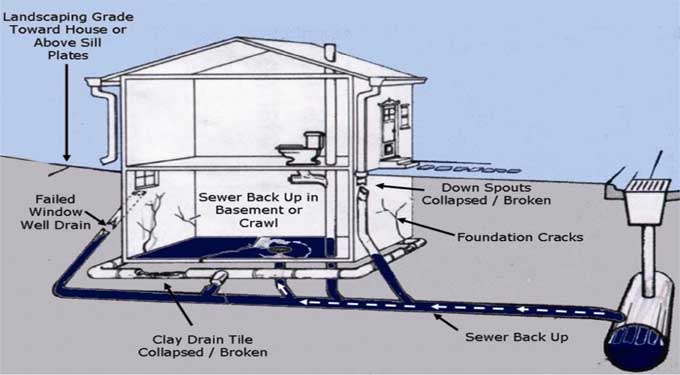