A Guide to the Construction of Brick Walls

It is often combined with cement mortar to form brick walls called English Bonds, Flemish Bonds, and Rat Trap Bonds. Depending on the bond type, the wall may appear different from the outside. There is a pattern of staggered vertical joints throughout all construction systems of brick walls. Bonded bricks do not separate when living or deadweight applies to a wall.

Bricks and cement mortar used for making first-class brickwork should also be of the highest quality. Load-bearing walls are built with this brickwork. Rich mortar is used for making the mortar, in which the ratio of cement to sand is between 1:3 and 1:6.

Third-class bricks are used to construct this kind of brickwork along with cement mortar or mud mortar. Governmental bricks are never made to third-class standards work. The brickwork of this type is generally used for temporary construction in the private sector.

Bricks, stones, and mortar are all made from the mortar. This binding agent is used to bind bricks, stones, or surfaces as claddings or wall coverings.

The most common mortar utilized in brickwork today is cement mortar. Though lime mortar is also used, its use is restricted due to its high level of craftsmanship.

In a concrete mortar, cement, sand, and water are mixed. As an adhesive, cement needs sand to fill in the spaces. During its wet state, cement mortar is plastic and can bind materials together. According to general definitions, mortars have a ratio of 1:2, 1:3, or 1:7.

1. Dry, clean, flat surfaces should be used to mix the mix.
2. You should mix according to the specifications.
3. Mixing by volume is recommended.
4. It is best to use sufficient water to spread the mix easily over bricks or apply it vertically. The addition of water in excess of what is required can ruin the mix and reduce the strength of the masonry.
5. As soon as the mix is prepared, use it immediately.

The foundation for brick walls is normally constructed as a strip foundation. The foundations consist of continuous strips that run the length of the wall, hence their name.

A building's load is transferred to the ground by these structural components. Additionally, this method can hide foundations from view. Foundation trenches need to be dug precisely according to the foundation plan provided by the architect.

A centerline principle is used to mark the trenches on the site according to the architect's drawings. Depending on the thickness of the walls and the strength of the soil, the trench size may vary. Ramming the dug trenches solidifies the base. Concrete is applied on top of rammed surfaces. Normal thickness is six to eight inches. It has to be cured before the base concrete layer attains its expected strength.

Precautions of the Construction of Brick Wall

1. Since it is the markers of foundations that determine the location of walls, they must be absolutely accurate.

2. It is not a good idea to dig trenches during the rainy season. As per specifications, brick mix, cement concrete mix, and mortar mix should be applied to the concrete.

3. Trenches have different widths and depths, depending on the conditions of the soil and its load. In the case of accumulating loads coming onto the foundation, there is a large area for the load to be distributed. There are four main types of wall foundations: load-bearing, non-load-bearing, partition wall, and toe wall.

Most of the walls in an Indian house are made of brick. Building a house starts with walls that create rooms. A wall's structural role goes beyond separating rooms. It entails transferring the weight of the roof to the ground.

In brick wall construction, wall foundations are constructed on strips or rafts. Bricks and mortar are used to construct the walls. Various structural qualities and thicknesses can also achieve with these. 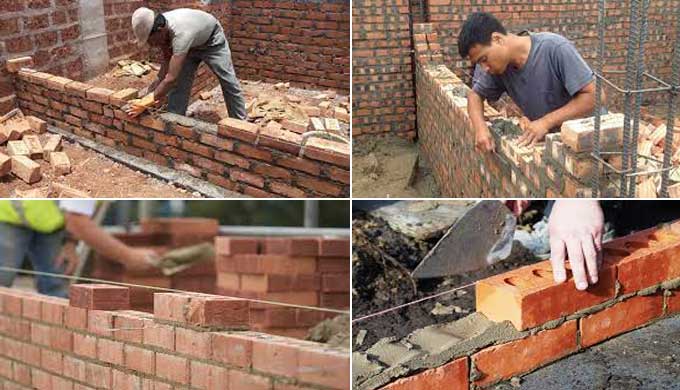