Do you know what is Spread Footing?

Buildings and civil constructions are supported by a foundation, the part of the structure that is directly in contact with Earth so that the structure's weight is distributed evenly to the soil. It is imperative that the type of soil structure on which a building is constructed, as well as its size and weight, are taken into consideration when designing a foundation.

Consideration must be given to the distribution of soil pressure to ensure a solid foundation. Structural components such as the Spread Foundation provide strength to the foundation of a building.

A brief explanation about Spread Footing

Spread footers are made of concrete and steel, and their designs make them less likely to fail than other spot footers. The Spread footings are used in order to support the column and walls as well as to disperse the load from the structure to the soil below.

This type of footing behaves like an inverted cantilever when loads are applied in the upward direction, and is usually a stiff element and orthogonal only when the symmetric footing is applied.

As a result of the steps, the weight is distributed over a wide area instead of being concentrated in one spot. Due to this, a stepped spread foundation is created by having the Spread Footing base wider than the Bearing Footing base.

Below mentioned and explained a few well-known types of Spread Foundation:-

An array of columns is supported by a combined footing. As long as the other columns carry equal weight, the combined footing can be rectangular, or it can be trapezoidal if the space is tight and the loads are uneven.

They might have concrete projections at the bases or be stepped. They used to support individual columns. For heavily loaded columns, both directions of steel reinforcement are incorporated into the concrete substrate.

An offset of 15 cm is usually provided all around the concrete bed. Brick masonry columns have an offset of 5 cm on each of their four tall sides in regular layers. There are different types of footings for concrete columns, including slabbed, stepped, or inclined footings.

Footings for continuous columns are similar to strips for walls, the latter of which supports two or more columns at a time. If the weights are heavy, either the columns deliver the loads directly to the slab or a longitudinal beam delivers the loads through the beam.

An earthquake area would benefit from this sort of foundation that prevents differential settlement.

Using a grillage footing, large loads can be transferred from a steel column to soil with low bearing capacity. Due to this layout, there was no need to excavate significant areas and the base was provided with the required space to reduce pressure.

Grillage footings are made of rolling steel joints, called grillage beams, which can range in level from one to two. There are two tiers of the double tier layout, with the upper tier perpendicular to the bottom tier.

There is a form of a foundation called a mat foundation that consists of a continuous, earth-based slab covering the entire footprint of a building, carrying and supporting the building's weight.

A few benefits of having a Spread Footing

There are several advantages to using the spread footing as a foundation within the building, including:-

2. The spread footing provides continuous support over the entire building plan, unlike standard spot footings, which have only one point of contact.

3. The purpose of spread footings is to support a foundation or piers underneath a structure.

4. Generally, spread footings are made of concrete with steel reinforcement for additional strength. As the weight of the structure is distributed over a wider area, spread footings tend to fail less frequently than spot footings.

5. Structures with spread footing are more durable because structural damage is reduced. To withstand the weight of a building, the footings need to be strong.

A few drawbacks of having a Spread Footing

There are several drawbacks of using the spread footing as a foundation within the building, including:-

1. Soils of all types may not be suitable for this kind of footing.

2. Filling the whole lot at once is impossible since such a large volume of concrete needs to be prepared manually.

3. The process of pouring concrete takes a lot of effort, so it is not something you can accomplish alone. 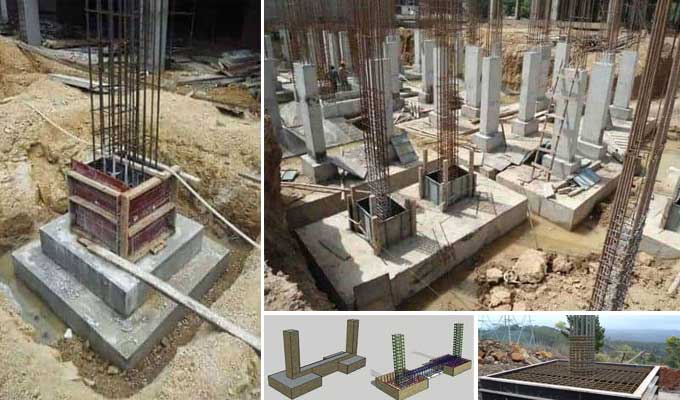