Classification of Stair and their uses

It?s width is very retractable and is mainly found in small houses and are used in such conditions which runs straight between two floors. This may consist of either one single or more than one flight with a landing.

Turning stairs have sub classifications, they are:

A quarter turn stair is the one which can change its direction but the turn can be affected either by introducing a quarter space landing or by providing winders. It can turn 90 degrees as it rises to connect two different levels. So it is also known as a L-stair.Quarter turn stairs are of two types.

i. Newel quarter turn stairs: These have clearly visible newel posts at the beginning of flight as well as at the end. Also there may either quarter space landing or winders.

ii. Geometrical quarter turn stairs: In these both the stringer and the hand rail is continuous without any newel post at the landing area.

In this the direction of the stair is reversed to 180o. Also these type are quite common. Half turn stairs are of three types.

i. Dog-legged stairs: This comes under the category of newel stairs, where newel posts are provided both at the beginning and at the end of each flight.

iii. Geometrical half turn stairs: These stairs have stringers and the hand rails are continuous, without any intervening newel post. These stairs may contain either with half space landing or no landing.

The direction of the stairs are being changed three times with its upper flight crossing the bottom one. These may be of newel or open newel type.

These are generally used when the vertical distance between two floors is more and also when the length of the stair room is limited. 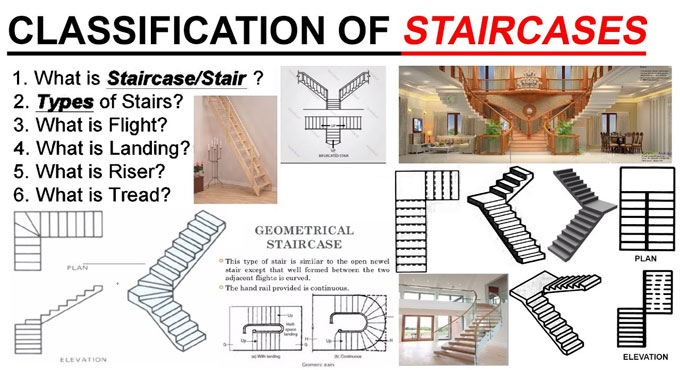