The objective of stress-strain curve is to define the behavior of steel bars under loads. To develop the curve, the steel specimens are examined. A steel specimen is progressively drawn through a testing machine unless it breaks, and then stress and respective strains are recorded. The stresses are then outlined along the vertical axis, and because of these stresses, respective strains are outlined along the horizontal axis.

When the steel specimen is exposed to load, it functions like an elastic material to indicate that the stresses and strains are proportional. When the load is raised, the specimen begins to lose its proportionality and ultimately collapses or yields. When the load is raised beyond the yield point, the steel bar undergoes stress hardening and gets the strength to resist larger stress, after it attains the fracture point.

Stress-strain Curve of Steel Bars: When the steel specimen is exposed to load, it passes through different stages ranging from elastic stage, yield point, and fracture.

Limit of Proportionality: This stage is demonstrated on the stress-strain curve from the initial point until point ?A?. In this region, the stress remains low and fails to produce permanent strain. The stress and strain are relative to each other, as a result when the stress is eliminated, the steel bar would recapture its original shape.

Elastic Limit: It is situated among point ?A? and ?B? on the curve. When the stress on steel specimen is again raised, it will produce elastic strain. The stress and strain are not relative to each other.

Yield Point: It is the most vital point on the stress-strain curve from the design perspective. This point is indicated by letter B on the curve and treated as the failure point in the design of reinforced concrete structure. Therefore, when the steel bar attains the yield point in the reinforced concrete element, it will be treated as a failed member.

The yield point is the origin of steel plastic deformation. The stress and strain are not relative. The point B is defined as the upper yield point while the point C is the lower yield point.

Ultimate Strength: When the stress is again raised beyond yield point, strain hardening occurs that is demonstrated from point C to D, beyond which necking commences. Throughout strain hardening, the material is subjected to changes in its atomic and crystalline structure that leads to greater resistance of the material to further deformation. The maximum ordinate in the stress-strain diagram i.e. point D belongs to the ultimate strength or tensile strength.

Rupture Strength: Rupture strength stands for the strength of the material at rupture. It is also called the breaking strength. It refers to the point ?E? on the stress-strain diagram. 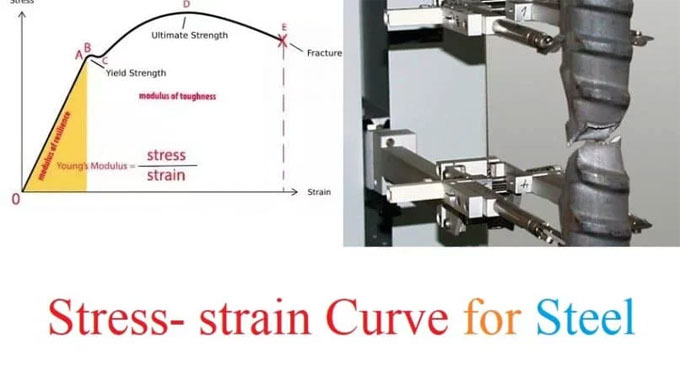