The foundation of a structure is a natural central feature of the construction site. That is why it is crucial. It is crucial for you to understand the different available options before you in order to make the most efficient choice for the specific project.

Although there is a significant difference between pad and strip footings, strip footings may be used instead of pads and single-load footings in some cases.

Strip footings, also known as strip foundations, are a type of shallow foundation with a founding level of no more than 3 meters above the ground surface.

As long as the soil has a sufficient bearing capacity, this option can be used on any type of soil. Strip footings can thus offer continuous support for linear constructions such as load-bearing walls, which are normally level but can also step, utilizing strip footings.

Because of the way strip, footings are produced, they are significantly superior to pad footings when dealing with closely spaced columns.

Strip footings are also the greatest option for light loads, such as those seen in low-to-medium-rise residential properties, because they can be used as mass concrete footing.

The breadth of a wall structure determines the size and placement of strip footings. Between the depth of the strip and the breadth of the wall, there will usually be some overlap.

The footing width strip is frequently three times the width of the supporting wall, resulting in a 45-degree angle between the base of the wall and the soil. Strip footings must be deep enough to prevent frost, and the width may need to be increased when working with poorer soils.

When it comes to maintaining a linear wall by distributing stress points, strip foundations are frequently the best option. Strip footings are superior to pad footings in closely spaced columns due to their depiction. Furthermore, because strip footings can act as mass concrete foundations, they are a preferable solution for low-to-medium-rise buildings with light loads.

Pad foundations, also known as pad footings, are often shallow foundations. They can, however, be constructed much deeper if the terrain and soil type are deemed suitable. Even though they provide a similar role, this immediately distinguishes them from strip footings.

Pad footings are not formed by strips, which is one of the major structural distinctions.

Pad foundations, also known as pad footings, are often shallow foundations. They can, however, be constructed much deeper if the terrain and soil type are deemed suitable.

Despite the fact that they provide the same purpose as strip footings, pad footings enter into the ground deeper if the soil and ground are suitable. Pad footings differ in structure from strip footings as they contain no strips. Wind and uplift are generally the biggest weakness of these footings.

Concrete beams are made of rectangular, square, or circular shapes that support single-point loads, including structural columns, frames, and beams. A single-point load intends to sustain concentrated loads, so the support method differs from the counterpart strip footing.

Pad footings will, in most situations, be the same thickness regardless of whether the upper surface is sloping. Ascertain that the ground layers are thick enough to support the plan's shape while carrying weights.

Mainly, Strip Footings are installed around the perimeter outside of most houses, and Pad Footings are used to support heavy loads and beams within the household. 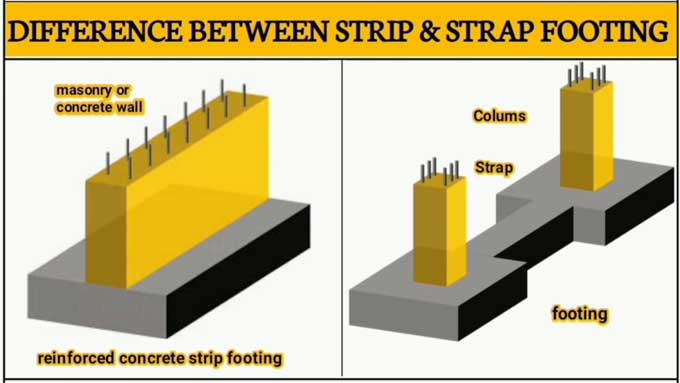