Step-by-Step Guide to Construction of a Strip Foundation

Strip Foundation is one kind of foundation that transfers load from structures to layers of soil or rock that have sufficient bearing capacity and settlement characteristics. It is possible to categorize foundations as shallow or deep. The general recommendation is to use shallow foundations when the load on a structure is less than the soil's bearing capacity.

What you need to know before using Strip Foundation

It is necessary to verify with the local authorities the extent of any mining that has ever been done in the area. The size of a foundation depends on the load placed on it. It comes to bear on the foundation and the walls of the property.

It is especially important in clay soils for existing trees to collect considerable amounts of soil moisture. Depending on the weather, trees constantly draw water from the ground, further shrinking the clay. Over a year, the ground can rise or fall by as much as 40 mm around a tree.

A tree's roots cannot pull water from the ground when it has been cut down, which can cause the ground to swell up by 150mm. That can affect the foundations as well as any drainage systems in the root zone of the tree. It is standard building practice to keep structures as far away from trees as the tree's height when using strip foundations.

There will be a lot of force exerted on the property as a result of people, furniture, and fittings. In addition to the foundation design, snow loading must account for in the calculations. Buildings with flat roofs usually allow 1.5 kN/square meters, while tilted roofs allow 0.75 kN/square meters.

Calculations would take an eternity to explain due to so many variables. Considering that our building will be relatively low rise, so, in a normal reasonably sheltered environment, a value of 1 kN/square meter is appropriate.

Hence, the weight of the entire building as a whole, including the roof, etc., contributes to this force. To determine the dead load, multiply all the materials' weight by 9.81.

A foundation failure is not likely because made ground or soil strength varies widely in the loaded area. It recommends that the concrete strip thickness be at least 150mm thick and never less.

Most sub-soils can use for strip foundations. They are most suitable for soils with a relatively high bearing capacity. In low-rise or medium-rise residential buildings, mass concrete strip foundations are particularly suited to light structural loads. Other cases may call for reinforced concrete foundations.

As a type of shallow foundation, strip foundations provide a continuous, level strip of support to a linear structure, such as a wall or closely spaced rows of columns above them. Stepped foundations have an upper and lower level that overlap by the height of the step, the depth of the foundation, or 300mm.

A step's height cannot exceed the foundation's thickness. As much as the foundation strip projects beyond the face of the wall, it must project beyond each pier, buttress, and chimney that forms part of the wall.

It is now standard practice to have the foundation trench filled with concrete. The cost is typically much lower. Concrete pouring to the required height is usually more expensive than laying brick or blocks within two brick courses of finished ground level. Together, the labor cost and materials involved are usually greater than the cost of pouring concrete. 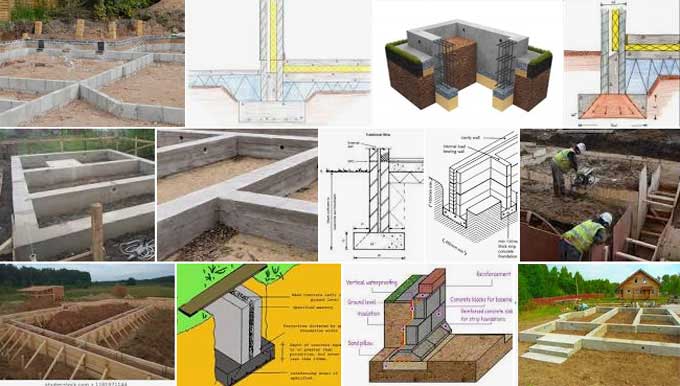