What is Sweating Slab Syndrome

Concrete is used for all kinds of construction works these days. It is the first choice for building supports and beams because of its excellent load-bearing capacity, tensile strength, and longevity. However, nothing is a hundred percent impervious to weather effects, and neither is concrete.

Concrete Sweating, or more technically known as SSS (Sweating Slab Syndrome) occurs when water droplets are accumulated on the surface of a concrete structure. The phenomena occur generally overnight and may look like the concrete structure is sweating, hence the name. This can be a potentially dangerous issue in some cases.

Reasons for Concrete Sweating: There can be two main reasons why a structure is showing the SSS - dew point and subsurface moisture. Let us discuss them below.

Dew Point: When you take a soda out of the fridge and keep it out for a while, the soda bottle or can starts sweating. The same thing happens with concrete as well, especially overnight. A concrete surface is rather cooler than the air in contact with it. When the concrete is cooler than the dew point (the temperature at which the water vapor in the air starts to condense into liquid), the moisture in air sticks to the concrete. This, in turn, starts forming the water droplets. Which, to uninformed eyes, looks like as if the concrete has started sweating.

All that water gets absorbed to form the crystals that harden the concrete. But the issue is, this process can go on for a long time. Initially, most types of cement can set in a day, but they harden over a long time - over weeks, even months. While the composite is hardening, the hydrostatic pressure inside them rises a lot. This, in turn, pushes the water out of the concrete slabs or structures. In this case, you can say that the concrete really does sweat, in view that the water comes from inside, not outside.

There can be some secondary reasons for SSS. For example, if the concrete slab is adjacent to wetness (wet soil or water body), the capillaries in a porous concrete can suck up moisture from the wet surface to the dry surface. Also, if the concrete mix has salts in it then due to their hygroscopic nature the salts will attract water into the concrete. The material on top of the concrete can also be the culprit in attracting water, like dust or rubber.

Dangers of Concrete Sweating: There are three major threats thrown by the SSS. Primarily, given time, molds can begin to form, or the concrete itself may display alkaline damages. A more direct or immediate problem may be the sweaty concrete surface may become very slick and slippery, endangering pedestrians and traffic.

Alkali Attack: More commonly known as the Concrete Cancer, it is technically called the Alkali-Silica Reaction (ASR). Most concrete aggregates contain cement and sand or other silica. The cement is highly alkaline and the amorphous silica is quite reactive. They interact in the presence of moisture and the results of this reaction take more space than the original components. This causes swelling and outward pressure inside the concrete structure, which can lead to cracks or spalling. Also, since the results of ASR are nowhere as strong as the concrete, it will mean gradually losing the strength of the concrete.

Slick Conditions: Moisture accumulated on a smooth surface is always a slipping hazard. Either the sweaty concrete or the water brought on top of the surface by capillaries and pooled will pose this threat. The moisture on a smooth-surface concrete will lower the friction coefficient of that surface. Which will lead to a lot of slipping, skidding and falling.

Mold Growth: A sweaty slab left unattended in humid air for a long time is a perfect habitat for mold spores to sprout and spread. This will not only lower the quality and aesthetics of the concrete structure, but it can also cause airborne allergies and pulmonary issues. Not to mention, a moldy surface becomes extremely slippery giving no grip.

How to Prevent Concrete Sweating:

1. For indoor uses, make sure there is good air movement throughout the facility so that the air does not have much time to stagnate on one surface and moisten it. Keep your facility well-ventilated to do this.
2. Reduce the floor-to-ceiling temperature differences. HVLS fans (High-Volume Low-Speed) are great at doing this. Distribute them above the concrete floor so the slow airflow saturates the space will equalize the temperature differences of the concrete and the air.
3. Another way to reduce the temperature difference is to turn up the heat with heaters or air conditioners.
4. Use air conditioners or dehumidifiers to dry off the air inside the facility.
5. Last but not least, keep the concrete surfaces clean so that accumulated particles do not absorb moisture. 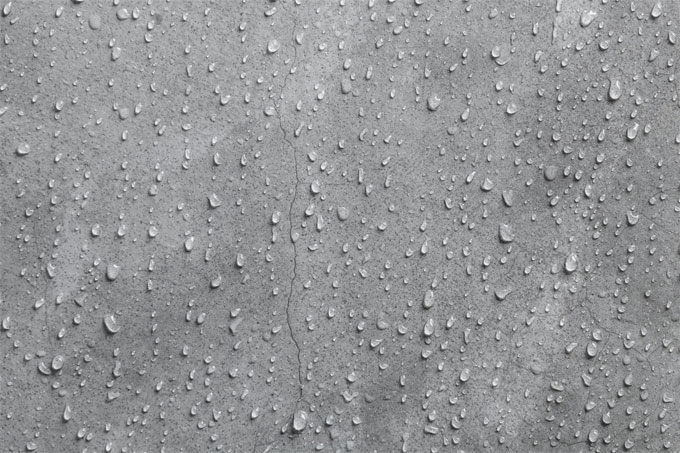