UAE has become among the stars of the construction industry recently, with the creation of Dubai. Abu Dhabi and Dubai are the most populated with many, many architectural wonders, built by various construction companies global or local. We have to mention the Burj Khalifa here, arguably the most famous modern civic construction in the world.

The cherry on top of our UAE construction companies list is Al Futtaim, they are a giant group with 200+ companies. They employ over 42,000 people from all around the world - Al Futtaim is known for its outsourcing efforts - and they are active mostly in automotive, retail, real estate, and financial services. Starting small in 1930, they have grown into an impressive conglomerate with branches in every major continent.

Started back in the seventies as a small engineering firm, the Al Habtoor Group is now among the most respected conglomerates in UAE. The group has interests and assets in every sector like hospitality, automotive, real estate, education, and publishing. Not only in UAE, but the group constructs large landmark projects in London, Vienna, Budapest, Beirut and Illinois.

The brothers Saeed and Mohammed had founded the Al-Naboodah Constructing Company back in 1958. Ever since, theirs has been a story of success. The Al-Naboodah Group Enterprise employs over 15 thousand people of all ethnicity. Their focus is divided into three main areas - civil engineering, building, and MEP. The group delivers projects both in UAE and internationally.

The Arabian Construction Company or ACC is among the best constructors in the whole Middle East region for their prestigious and complex track record. Ever since their conception in 1976, ACC has never had to look back, producing a variety of civil and heavy constructions. Recently they seem to be very much into smart buildings, which could be an investment into the next era.

At its time of establishment, it was a collaboration between the Dubai Transport Company and the british Balfour Beatty to construct the giant Mina Jebel Ali. Since then, the Dutco Balfour Beatty LLC has been constructing many major landmarks like airports, power stations, and mega-malls.

This is one of the international companies in our top 10 UAE construction companies list. It was established way back in 1948 and now has operations in multiple regions of the world like Canada, Europe, the Middle East, Asia and Australia. Laing O?Rourke has delivered some of the most iconic projects in UAE construction history. Their regional office in UAE is in Ladies Beach, Abu Dhabi.

Since its launch in 1975, Arabtec Construction has been a giant in the UAE construction business. The 40,000 employee strong company has a firm foothold in both real estate and infrastructure landscape in the region. It has exercised a diverse and amazing portfolio of projects all over UAE, much of which are concentrated around Dubai and Abu Dhabi.

For over 40 years, the Wade Adams Group has been a stalwart mark in the construction industry of UAE. They have worked in the Gulf region from 1976, leaving admirable footprints all around UAE, Oman, Bahrain, and Qatar. They do all kinds of construction work like airports, dams, roads and bridges, district cooling, residential infrastructure, and utility networks projects.

One of the oldest companies in Arab, the BinLadin organization started as a general contractor and then expanded to light to heavy construction. The kingdom?s economic history is directly mixed with the history of this organization since the beginning. The company now has many branches in various parts of the world.

ACTCO is among the major construction companies in UAE, and as such it has been working in many landmark projects all around the country. Though they are a local company and operate in the various emirates, they have mostly foreign shareholders and investors. ACOTO was among the first companies in this region to attain the ISO 9001 certification. 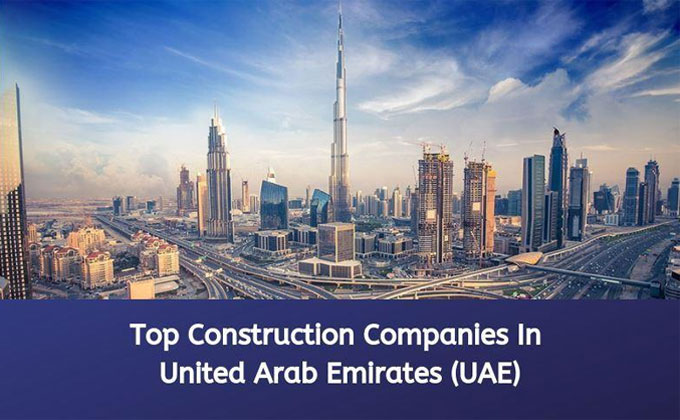