A Description of the Soil types and their Key Differences

The weathering of rocks forms soil. Soil covers most of our planet?s surface. Earth materials undergo physical and chemical changes in soil weathering. Whenever rocks come into contact with air, water, or other materials, they break down into smaller particles.

Water, glaciers, wind, and gravity are some of the methods of transporting soil. The transport method for a deposit of this nature can further classify it.

Moving soil is possible with swift-moving water. Streams may transport soil as suspended particles or by rolling and sliding along their bottoms. Water moves at a constant velocity regardless of the size of the particles in suspension.

Streams typically move downhill, pass over a valley, and ultimately reach large bodies of water by the time they reach the sea. Rivers carry and deposit soil, known as alluvial deposits.

The wind erodes, transports, and deposits fine-grained soils, just as water does. Aeolian deposits result from wind-borne soils. The wind deposits sands that form dunes. Dune fields are common in desert regions such as those in Africa, Asia, and the United States. To a limited extent, sand from dunes can use for construction.

The process of glacier formation involves compacting and re-crystallizing of snow. Ice formation determines glacier movement and growth. These glacial deposits are a result of the transport of soil.

Despite its slow movement, a glacier can deform and scour the surface and bedrock it passes over, glacier's melting results in the deposition of all its components, known as till. The ground moraine or till plain is the result of the receding glacier.

Gravity is another method for transporting soil. This method can only move soil over short distances. Talus is soil that moves by gravity. It is what landslides deposit. Gravity-transported soil contains grains of varying sizes and shapes. Gravity does not move soil at a long distance, so there is less movement of soil when it is deposited by gravity.

Swamps transport and deposit soils with high organic content and an unpleasant odor. Marshes and swamps accumulate decomposed aquatic plant material, known as peat. Construction materials would not be suitable for muck, as it is spongy, light in weight, highly compressible, and highly decomposed.

The soil that remains at the place it formed is mostly residual soil. In general, residual soils are found from 5 to 20 meters below the surface, with a wide variety of particles, shapes, and compositions. As the parent rock weathers in place, residual soil forms.

The world is home to residual soils in numerous locations, including Africa, South Asia, Australia, Southeastern North America, Central, and South America, as well as substantial areas of Europe.

Wind, water, glaciers, and gravity all contribute to the movement of soil from one place to another by weathering action. Because of the weathering of rocks, soil particles are largely immobile and remain at their original locations. As opposed to residual soils, transported soils are formed in one place and then transported to another.

Civil engineers should understand how soils move from one place to another and how they are transported. Civil engineers assist in the construction of structures' foundations. 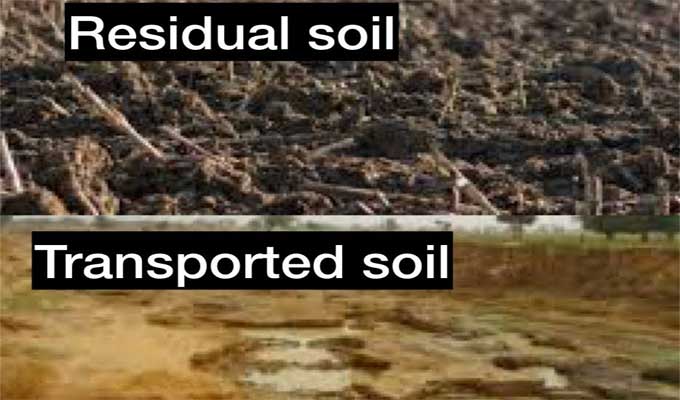