The tube is a structural engineering system used in high-rise buildings to withstand wind pressures, seismic pressures. Perpendicular to the ground, it resembles a hollow cylinder. Fazlur Rahman Khan developed this system in the 1960s, which uses many high-rise buildings.

Several materials can make tube systems, including concrete, steel, and concrete. Building columns are connected to deep spandrel beams via moment connections as part of the external perimeter. It creates a rigid structure from columns and beams create a strong and dense structure.

With this stiff exterior framing, lateral loads can absorb because interior columns can place in the core. There is no need for columns inside the building because the interior can frame for gravity loads.

Dewitt-Chestnut, a Chicago building designed by Khan in 1963, was his first building to use tubes. Chicago's Willis Tower was the first skyscraper to use it.

There is no specific shape limit for the tubes, such as squares, circles, rectangles, or free forms. Framed tube structures feature closely spaced exterior columns rigidly linked to deep spandrel beams extending continuously along the facades and around the building's corners.

Through the use of a reduced clear span and an increased member depth, this arrangement increases beam and column stiffness. As a result, a building of this type can reach a height of 38 to 300 meters.

In contrast to framed tube systems located far apart, trussed tube structural systems have fewer exterior columns. Braces or concrete walls link the columns together. Rather than bending or curving flexure, the interconnection of the exterior columns makes the box rigid enough to resist lateral shear using axial force rather than bending. The trussed tube system allows for clear window space because of the wide column spacing.

Tube-in-tube structural systems are also referred to as hull and core arrangements. The structure consists of a core tube and an exterior tube. High-rise buildings need the core tube to hold elevators, ducts, stairs, etc. The exterior tube system carries the majority of gravity and lateral loads. Inner and outer tubes are connected horizontally both as flexural and shear components.

Building with tube-in-tube is an affordable, versatile design that creates a variety of interesting shapes. Firstly, the tube-in-tube building is the Willis Tower in Chicago.

The tubular structural system emerged from the rigid frame concept as a framework capable of resisting all the lateral loads with the façade.

On the outside, columns encircle a central arrangement. Usually, rigid frames consist of closely spaced perimeter columns and deep beams. This arrangement results in a dense and strong structural wall protecting the exterior of the building.

As long as the exterior framing is strong enough to resist lateral loads acting on the building, the interior will also be capable of resisting gravity loads. There are few interior columns throughout the structure.

Beams or trusses span the core and perimeter frames. They transfer gravitational loads between them. As a result, the perimeter tube is more effective at preventing overturning moments caused by lateral loads. 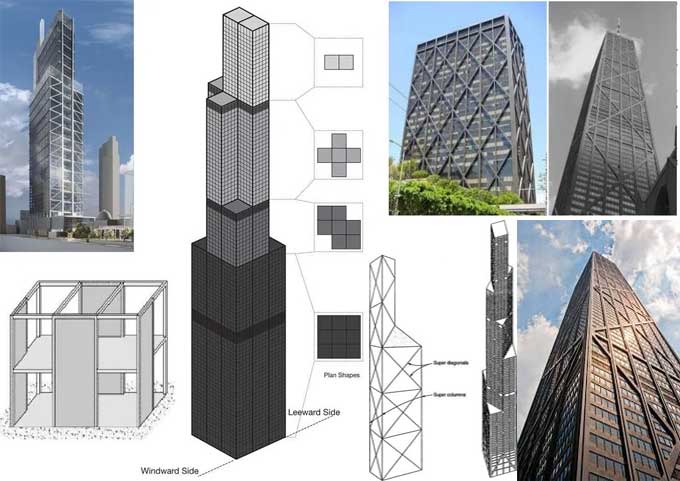