Aspects of Tunnel Alignment and Their Importance during Tunnel Construction

? Increasing tunnel service quality and reliability.
? As a way to reduce the impact surface transit operations have on sensitive areas.
? Transit trips should be reduced.

The selection of tunnel alignment is dependent on:

Under the standards and recommendations, the tunnel must have a minimum gradient value. The tunnel alignment must remain straight as much as possible to ensure the shortest and most economical route. You should always ensure that ventilation and lighting are adequate. A tunnel's side drains must slope at least 1 in 500 to have effective drainage. Long tunnels have gradients from the center to the end.

For a newly constructed tunnel, a detailed tunnel survey and precise measurements are carried out. Tunnel ends won't meet if the alignment setting is wrong. The centerline of the tunnel precisely measures the ground as part of the tunnel construction process. The next step is to perform a survey to determine the exact location of the tunnel and other levels on the underground map.

In designing a new tunnel, the horizontal and vertical alignment of the road and the highway sections that include tunnels is a fundamental and first-rate stage that rarely gets the attention it deserves. Often, designers overlook the complex system that makes up a tunnel, which is unlikely to lead to effective tunnel design.

The most important optimizations at this stage are technical and financial. It is crucial to mobilize a multidisciplinary team of experienced specialists and designers from the very beginning of the design process, who will be able to identify all the project's potential problems, despite the inexact nature of preliminary information. It will be able to make sound decisions regarding major choices and then consolidate those elements in the future as new information becomes available.

Classification of Tunnels Based on Alignment

Short tunnels used for negotiating minor obstacles are called off-spur tunnels. It is called saddle tunnels or base tunnels when tunnels run along natural slopes in valleys. An incline tunnel is built in steep hills to facilitate the operation of tunnels and also to ensure safety. They are categorized as spiral tunnels when they build in the shape of loops along the insides of mountains. Saddle tunnels or base tunnels situate at the bottom of steep valleys or slopes. Aligning the tunnel this way allows steep slopes to be avoided.

It is possible to align tunnels straight or inclined. Vertical shafts are used to check for alignment accuracy and level. During tunnel surveying, measurement and alignment of the surface are established.

Steps for setting the tunnel out are as follows:

1. Surface survey for identifying the centerline or alignment of a tunnel: This method involves cross-sectioning both ends of a proposed tunnel with a theodolite to determine their alignment. Standard plans and detailed surveys are used in order to select the final alignment.

2. In this step, the centerline or alignment on the surface will be transferred underground to the shafts.

3. Leveling of the surface of the underground is normally done in the usual manner for setting out underground. The levels underground are transferred using nearest benchmarks. 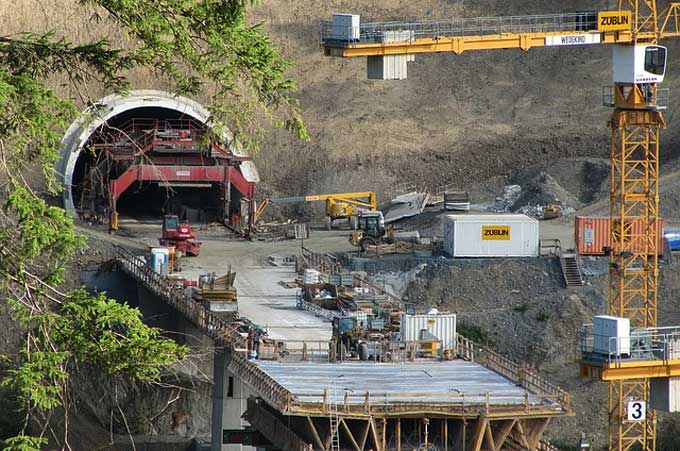