Specialized equipment is needed for tunneling through soft ground. Explosives are not used in this process, and excavation work is performed with pickaxes and shovels instead of explosives. Air compressors have occasionally been used in the process. Based on the type of soil, the rail may need support along the sidewalls and at the roofs during excavation. Timber or steel plates or similar materials could be used to provide support.

Subways, sewers, and other urban services often use soft-ground tunneling. Because the ground arch in soil deteriorates with time and construction of buildings or tunnels may cause the load to change.

Soft ground tunnel structures are typically designed to support the entire weight of the ground above. Soft-ground tunnels are usually circular in shape in order to increase strength and adapt to future changes in load.

If the roof can stand without support for some minutes, this method is suitable. Ten to twelve feet per day could be added to the method. The temporary primary support during excavation is provided by the needle beam, which is a sturdy timber beam.

There is a drift pushed into the top of the tunnel. Two vertical posts and laggings support the drift. Following this, the drift sides are widened, and structural support is provided with timber planks and struts. It continues to widen until it reaches springing level.

At the springing level, wall plates are fixed. Vertical posts, in turn, support the wall plates. Hence, the entire roof level is taken up by vertical posts. Following the removal of the posts supporting the drift, tunneling work can continue as usual.

The American method of supporting the roof load uses underpinnings rather than vertical posts. Five meters before the existing arch lining, the tunnel top is drilled with a drift. There is then a widening of the drift on both sides and support provided by crown bars and posts. Work continues until it reaches the level of springing. As it crosses the tunnel, it is supported by underpinnings. As well as good quality timber, this method requires frequent and simultaneous movement between locations.

Tunneling through the soft ground using Forepoling is an ancient method. This method involves making a frame that resembles an A, mounting it near the tunnel, and covering it with suitable planks. A viable depth is then determined by inserting poles in the frame.

In areas with low levels of overburden and no need to disturb the surface, this method is particularly suitable. Heading excavations are supported by crown bars and laggings in this case. A crown bar post and laggings are used to support the excavation of the sides. Following that, the arch will be lined & further excavations will take place.

As a result of the close placement of the timber segments, the Belgian method produces lighter timber sections. Although, there is one major disadvantage due to the system of the underpinning of the arch, which can cause settlement and cracks in the masonry, mainly in case of avoidable subsidence of the soil.

When the walls of the excavation begin to flex under the weight of the cover, this method is used for long tunnels, especially those at great depths.

For a short length, it entails excavating the whole section and adding a sidewall and an arch. 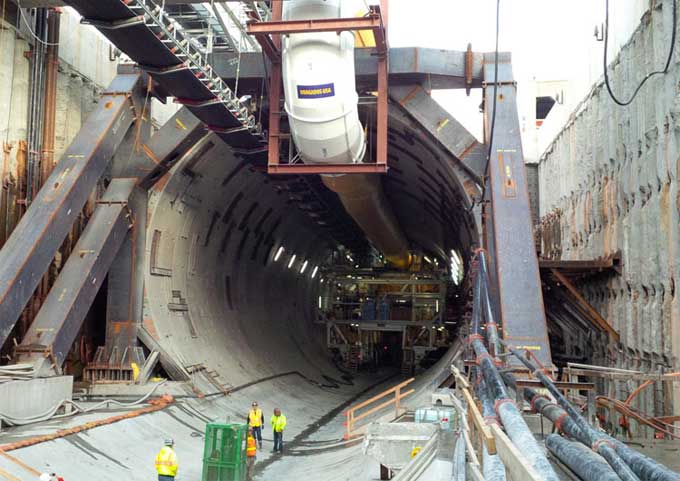