The bridge will provide a new alternative to the Istanbul strait passage by connecting Gallipoli on the European side of Turkey with Lapke on the Asian side. It aims to boost economic potential and strengthen social ties in the region by improving freight transportation.

The spires will mirror the shape of an artillery shell as a tribute to the legendary World War I battle of Gallipoli, towering 318 meters with a mid-span of 2,023 meters to commemorate the Republic of Turkey's centennial. During World War I, the Ottomans and British Commonwealth, and French forces fought in the Battle of ?anakkale, which earned the bridge its name.

?anakkale is the Turkish name of the Dardanelles. In addition to the motorway, President Recep Tayyip Erdogan's program of major constructions has already produced the Bosporus Tunnel, which opened in December 2016, and the third Bosporus crossing in Istanbul.

With less than a year left until the bridge opens construction milestones continue to be achieved on the 1915 ?anakkale Bridge. The installation of the catwalk is an important milestone in construction, while 144 wire strands in the main span are to be installed, and 148 strands in the side spans.

As soon as the main cable installation is complete, hangers will be installed before prefabricated sections are lifted into place to support the bridge deck. A ?1bn project began construction in March 2017 and is expected to be completed in just over a year and a half, with the opening planned for March 2022.

The bridge's twin 318m-high towers were completed in May last year.

Building, operating and transferring the project has been awarded to a consortium comprised of Turkish companies Yapi Merkezi and Limak and two South Korean companies, each with a 25% share. An operation of the bridge for 16 years, two months, and one day was offered in the tender before its handover to Turkey.

More than 5,000 workers will keep working round the clock to complete the project before the deadline. Located near the Malkara- ?anakkale highway, the giant structure will serve as the centerpiece of a 101-kilometer route.

Six lanes of traffic will be available on the bridge, three each way, and the crossing time from ?anakkale, to Istanbul will be reduced to only four minutes as opposed to 45 minutes now.

Ministers of infrastructure and transport Kang Ho-in and Ahmet Arslan attended the ceremony with Prime Minister Binaldi Yildirim. President Erdogan announced the bridge would be the best in the world through video conferencing.

In the presence of so many dignitaries, this suspension bridge emphasized the importance of crossing the Dardanelles Strait, the ancient Hellespont linking the Aegean to the Sea of Marmara in Turkey's north-east.

As a result, it will become the world's longest suspension bridge, surpassing Japan's Akashi Kaikyo Bridge, whose main pillars will span only 1991 meters. The 2023 meter length is not a coincidence. 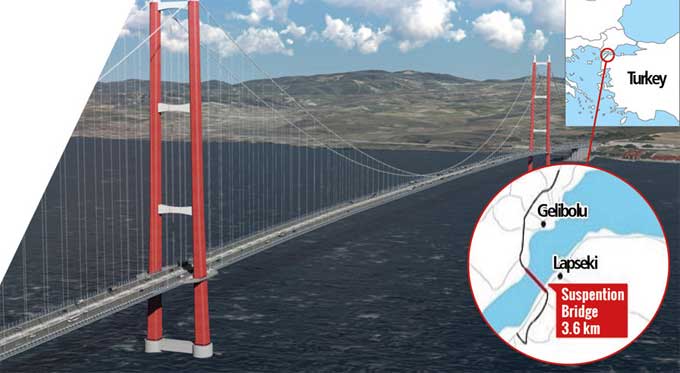