Different Types of Beam and its Classification

The Beam is one kind of structural building block that transfers loads compelled along its axis to its supports like walls, columns, foundation, and much more. Bending is generally known as the mode of beam deflection.

A beam can be classified into multiple types based on the type of support it provides, the load conditions, the cross-sectional shape, or the type of material it is made of.

Here are the brief details mentioned in the below assessment.

Overhanging beams have their end portions extending beyond their supporting structures. Despite its simple support, this beam has the properties of both a cantilever beam and a simply supported beam. Overhanging portions can be either at one end or at both ends, which is known as a double overhanging section.

Simply Supported Beam is one kind of beam that has supported both ends consisting of pin support at one end & roller support at the other end.

Just like the name, both ends of the beam are fixed that holds it from rotating or moving either horizontally & vertically at that end.

Continuous Beam is one type of beam that extends over more than two supports distributing through its length.

As a rule, the cantilever beam is a parallelepiped with a length (l), thickness (t), and width (w) or a beam consisting of two beams. In response to a load, the beam bends the load from the bending end to the fixed end.

The Cantilever is a structural design feature seen in our everyday lives, such as balconies in a building that are fixed on one end and unsupported on the other end. Another example of a cantilever is a road directional sign, a diving board in a pool, or a backboard in a basketball court.

An I beam is a type of structural steel commonly used in buildings. It is also known as an H, W, or wide beam and a rolled joist. As structural support, they play a crucial role. Beams of this type are capable of withstanding multiple types of loads.

A cross-section of it resembled the letter I, thus its name. In a variety of sizes and shapes, these beams are commonly used to build beams and columns. Civil engineers and foremen must understand the significance of I beams in steel structures.

A rectangular beam is cast in a monolithic manner with a T-shaped slab. Flanges are the slab parts that form the top and bottom of a beam to hold it firm in case of compression. Under slabs, the part that supports the shear stress is called the rib.

C-Beam as well as being called a channel beam, parallel flange channel beams (PFC) have a unique shape consisting of a web that is typically aligned vertically, and two flanges extending from one side of the beam. Its one-sided flanges give it a C shape, which allows it to be easily distinguished from other types of beams.

Structural element constructed of reinforced concrete positioning it horizontally to support loads. The bending and shearing of such beams induce tensile stresses, which are amplified by steel reinforcing.

Steel beams are structural steel products designed to support heavy loads. A steel beam can be various sizes and types, which determines how it is used in the construction of buildings and structures. It is determined by the specifications of a structure which determines the geometry, size, and shape of beams. Usually, these beams are straight or curved. 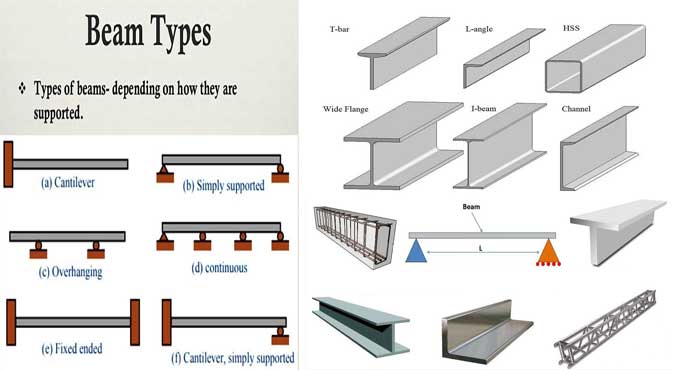