The Fascinating Science of Construction & Types of Bridge Railing

People and vehicles can prevent from falling from bridges with bridge railing. Steel or concrete guardrails are available. Whenever motorists drive over a bridge, guardrails are prominent so that drivers are alert and safe. In addition to containing traffic, these railings also enhance the aesthetics of the bridge.

Crash test conducts on modern railings for vehicular impacts. The rails on bridges today are much heavier than they were decades ago. Materials used for bridge rails include concrete, steel, and aluminum. Rails from the newest rails may need repairs from impacts, but rails from the older rails may need repairs due to deterioration abetted by their lighter construction.

There are railings on every modern span bridge that carries highway traffic to prevent cars from falling off the bridge into the river. On the other hand, bridge rail designs to be rigid and do not deflect upon impact, unlike guard fences found along roads or used on roadways over buried structures. Rather than supporting relatively small loads, bridge railings must resist relatively large loads while redirecting large vehicles.

Railings on a bridge will depend on several factors, including their location, type, and purpose.

Railings on bridges provide pedestrian safety, aesthetic appeal, and a custom touch. Here is a brief overview of the types of bridge railings so you can make the right choice for your project.

The construction of bridges often relies on local resources, such as concrete. Bridge deck slabs are reinforced with concrete railings, which create a formidable barrier against vehicles.

Railings like these are suitable for roads with high traffic and areas where run-off-road accidents are prevalent. An urban bridge or a bridge that receives heavy truckloads would benefit from concrete railings.

The railing costs a lot, and its thick appearance obstructs the view of the open road. While maintaining the concrete railing's strength, it is possible to increase visibility by using a combination of wall barriers and tubular railings. The construction budget, the material of the bridge deck, and specifications of the state all impact bridge railings.

Steel bridge railings most commonly consist of tubular rails. Railings of this type can be built independently or integrated into concrete curbs and low barriers to create a flexible building product.

The railing system's beams and posts work together to provide the strength necessary to create a sturdy barrier. It is common to use decorative steel railings for pedestrians and low-movement vehicles. The railings on these bridges are thin, decorative, and provide pedestrian protection.

Consider a W-Beam railing when building a bridge or road with limited traffic. There are usually 27 inches between the top of the bridge and the pavement of this railing system, which attaches to steel posts or truss girders. It can also be doubled so that its strength can be maximized.

Steel railings like the W-beam are also available but work best in areas with heavy traffic. Steel and pedestrian railings can be painted or galvanized to add extra finishes. As a result of its popularity, states have different requirements for building steel railings systems.

Guard rails such as the Thrie Bridge rails are especially useful for slopes and curves, especially those with sharp bends. Thrie beam rails, unlike W-beams, have a three-wave cross-section design and are extremely tensile and corrosion-resistant.

In the event of an out-of-control vehicle, beam rail systems absorb the impact and direct the vehicle to a safe stop. Besides being versatile and effective, these rail systems also offer excellent performance. 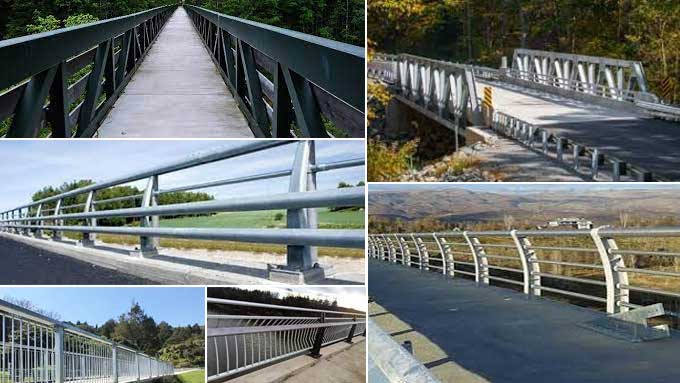