What are the Different Types of Columns in Construction?

The various types of columns are mostly categorized depending upon the types of material to be used in the construction and also according to its structural behavior.

Let?s discuss all types of columns in detail.

Classification of Columns Based on Cross Section

Classification Based on Construction Material

Based on Height of Column and Cross Section (Width)

Classification of Columns as per Lateral Load Resistivity

Other Types of Columns

Stated below is a short detail about every type of columns

Concrete is one of the widely used construction material in the world is concrete, the reason for it is because it is easily available and can be easily produced.

We have to also remember that it is not an eco-friendly material which leaves a considerable amount of carbon footprint.

The concrete column is a reinforced concrete element which is capable of carrying the axial stress and the bending stress applied from the other elements for example beams, slab, etc.

Compared to other columns in the same scale concrete columns have a higher stiffness.

In terms of cost of the construction it is possible for it to be in the same range.

Columns are placed to hang the floor. Tension columns can be both vertical and angular.

In case of bridge construction, it is the pile which carries the tensile forces starts acting as the tension columns.

In the same way there are many situationswhere there is a need to construct such types of columns to carry the tensile stresses.

Tension columns can be constructed from both, concrete or steel or even from any other material.

A composite column is formed when two or more materials are combed together to form a column. Composite columns are also not common in construction.

To cast a composite material structural steel, reinforcement, and concrete are widely used.

Due to composite action the composite columns have a very high load-carrying capacity when compared to an ordinary reinforced concrete column.

In high rise building construction you will find the wide usage of composite columns. Since it is difficult to construct these columns which has resulted in them being unpopular.

It is also true that composite columns are more efficient in terms of load-carrying capacity if compared with other various types of columns.

The difficulty in construction comes from having the proper connection of lower-level and the upper level of the columns. Also, continuous casting of composite columns is not possible as they are made from different materials.

Here is an example, it is important for the steel section embedded in the concrete to connect to the upper level, it is also important to create the connection of the beams and for it to establish before pouring the concrete.

The designing of the composite column must be according to relevant standards published and as per the local guidelines. When the detailed drawings take place construction aspects of it should be taken into account.

The braced columnsare related to the lateral load resisting of the building.

When there is a system to bear the lateral loads applied to the structure without the need to transfer them to the columns, these columns can be designed as braced columns.

Such as, in the case of shear walls in the building where the shear walls are design to carry the lateral loads. The columns in those structures can be termed as braced.

It is just the opposite of the brace column definition.

When the lateral loads are applied to the structure and there is an absence of shear walls, that is when they are to be created by the frame.

In such cases, columns are designed as unbraced.

Just as the name suggests, these columns have a smaller height in comparison to other types of columns and are termed as short columns.

You will also find guidelines to check if the column is short and it is not due to the design.

According to British standards, the classification of short columns is based on the effective height and cross section dimensions of the column: When Column is Braced.

Here,lex is column height and h and b are column cross-sectional dimensions.

When Column is unbraced

Slender column in the design is considered when the above mentioned ratios are greater than or equal to the limiting values.

Such as, when there is a construction of a brick wall in a larger panel, then there is a need to construct stiffener columns and beams so that cracking can be avoided which takes place due to the thermal actions.

One of the most important rule is that when the area of the brick to be constructed within a frame is greater than 12m2 that is when there is a need to construct the stiffness columns and beam to maintain the above mention limit. 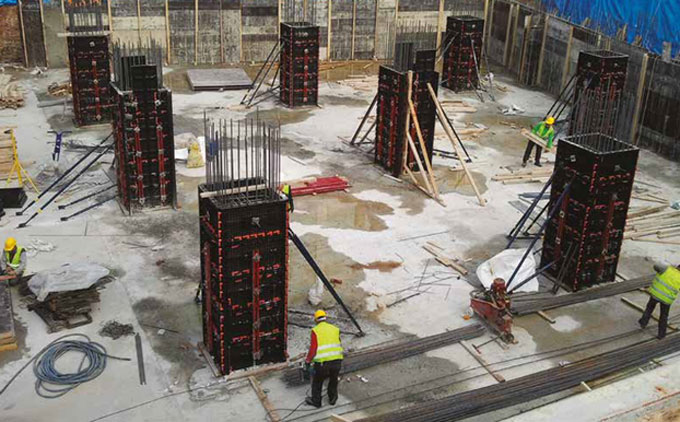