Types of construction beams and their uses

Beams are the horizontal member of a structure as well as weight-bearing supports that carry transverse loads. Beams transmit all the loads along with its own weight to the columns or walls.

The posts and columns, belong to the vertical companions of the beam and provide strong support to maintain the structural integration for all types of buildings.

The beams are present in walls, floors, ceilings, roofs, decks and garages of any building. Given below, the basic characteristics of a beam.

The I-beams are generally arranged on top of foundation or basement walls to give support to the upper level of the house. They're frequently utilized in garages where they are utilized as tracks or rails for the motorized wheeled trolleys which open and close garage doors.

Flitch Beams: Steel fabrication companies produce flitch beams by coupling lengths of wood and metal jointly. The wooden section can be fixed to other structures, whereas the metal part offers extra strength.

The outcome is lighter than a steel beam but can carry adequate weight as compared to a wooden one. Flitch beams are specifically usable throughout renovations work where a load-bearing wall is eliminated.

Hip Beams: Hipped roofs contain four sloping sides. The "hip" is where various roof sections intersect. The hip beams or rafters are necessary for these types of roofs.

Every hip beam supports various smaller pairs of beams that stretch from it. Wooden beams are conventional, but steel versions are gaining popularity since homeowners transform unfinished or obsolete attics and lofts into modern living spaces.

Cantilever Beams: The cantilever beams are useful for projecting house components like bay windows, balconies, roofs and canopies. As attached structures support them at just one end, cantilever beams appear to protrude from buildings.

A cantilever beam disperses its weight either at or along the unsupported segment of the beam.

To get more information, go through the following link hunker.com 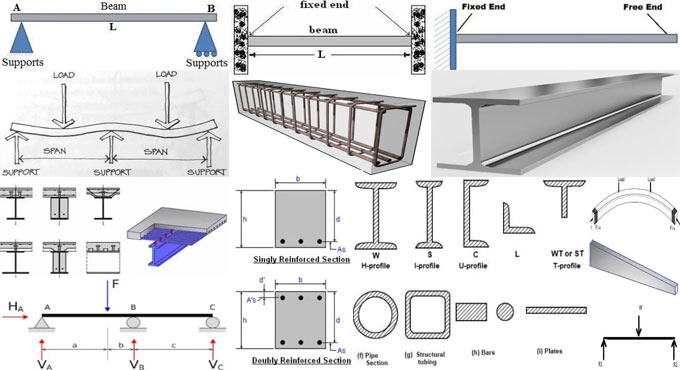