Road Pavements - Its Conditions and Different Types in Construction

“Roads” our day to day life is somehow directly or indirectly lies on the conditions of the roadways. Everyday millions of vehicles and fellow travelers rely on roadways, but we as a common public are not aware of the fact that how these roads can cay numerous traffic loads, so the answer is very much simple the Road Pavements are the mostly responsible for this load bearing.

Road Pavements is nothing but a hard and durable material lid down on a particular area mainly used to hold the immense pressure of ongoing vehicles or on- foot traffic in the forms of walk ways for which on-going traffic gets a smooth and comfortable experience.

By this we can get a brief idea of the necessity of Road Pavements, now let’s understand how this pavements are constructed.

1. It should possess optimal thickness that is required to spread the wheel load equally and create a safe pressure on the sub-grade oil.

2. It should be strong by structure and ready to take the loads all the time.

3. It should create right amount of frictions to prevent form skidding and colliding of vehicles.

4. Road pavements also make sure that vehicles could run both comfortably and with high speed.

5. The road pavements are also should be less dusty so that the vision of the ongoing vehicle driver doesn’t get compromised.

Road Pavements Types and their features

Road pavements with keeping in mind the structural formations there can be two broad categories they are as follows:-

These types of pavements are quite capable to transfer the wheel load nice and well balanced to much wider area of the roads. Compared to other types of pavements, not much layer of materials are present in it. Rigid Pavements creates a beam bridge over the areas of insufficient load support.

There are few types of rigid pavements mentioned below:

A. Jointed Reinforced Concrete Roads: It holds the position in the rigid pavements with a reason that boosting of pressure does not increase its stability rather it gradually started to increase the joint spacing nearly from 10 to 30m.

B. Jointed Plain Concrete Pavements: This kind of Pavements is formed with very less contraction joints. Here, mostly used are steel rods to transfer loads across the pavements.

C. Continuous Reinforced Concrete roads: In this kind of payments joints are not created between and it is carry through by providing reinforcement.

This kind of construction maintains slight contacts and through which it distributes loads to the sub grade and rely on perfect lock, particles frictions. This kind of pavements functions as a flexible sheets.

There are few types of Flexible pavements mentioned below:

A. Conventional Layered flexible Pavements: In this kind of flexible pavements higher standard materials are spread across the pavement creating the top most layer to pursue the loads and lower quality of materials are placed at the bottom.

B. Contained Rocks Asphalt Pavements: It is a pavement type where between two layers of Asphalt layers a single layer of dense layer of rocks are placed. The immense power of Asphalt concrete will degrade the vertical pressure on soil down grade and creates a protective barrier which prevents from surface water.

C. Full- depth Asphalt pavements: This kind of pavements are popularly used on that part where the load is comparatively high and there is a lack of local materials. It is constructed by pouring bituminous layer on the downgrade soil. 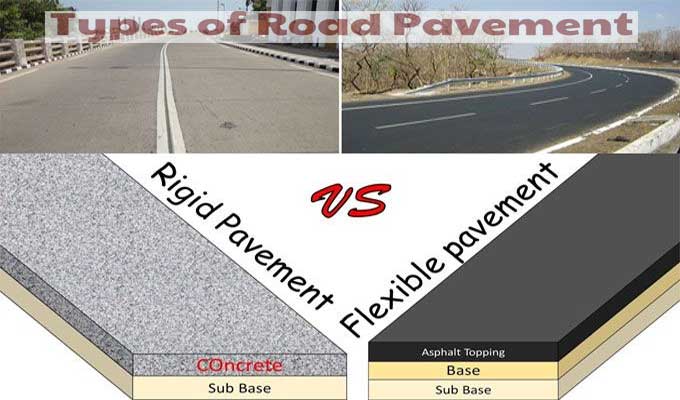