The following types of walls are generally found in building construction.

Given below, the details of these walls.

Load bearing walls also bear their self weight. This wall is normally situated over one another on each floor. Load bearing walls are utilized as interior or exterior wall. This type of wall will often be perpendicular to floor joists or ridge. Concrete is a useful material to support these loads. The beams enter directly into the concrete foundation. Load bearing walls inside the house is likely to run the equivalent direction as the ridge.

Non-Load Bearing Walls: Non-load bearing wall means a wall that doesn?t allow the structure to stand up and retain itself. It doesn?t deal with floor roof loads over. It is a framed structure. Normally, these belong to interior walls whose purpose is to separate the structure into rooms. They are constructed lighter.

The non-load bearing walls can be eliminated devoid of risking the safety of the building. Non-load bearing walls are recognized with the joists and rafters. They are not intended for gravitational support for the property. This type of wall is inexpensive. This wall is also known as ?curtain wall?.

Cavity Walls: The cavity wall comprises of two individual withes which are formed with masonry. These two walls are called as internal leaf and external leaf. This wall is also called as a hollow wall. The purpose of these walls is to minimize their weights on the foundation. The walls function as good as sound insulation. Cavity wall offers superior thermal insulation as compared to any other solid wall since the space is completely filled with air and lessens heat circulation. They contain a heat flow rate that is 50 percent that of a solid wall. It is very cost-effective as compared to other solid walls. It has good fire resistance capacity. Cavity wall facilitates to get rid of noise.

Shear Walls: It stands for a framed wall. The prime objective of the wall is to withstand lateral forces which generate from the exterior walls, floor, and roofs to ground foundation. The shear wall is effective for large and high-rise buildings. The main ingredients of this wall are concrete or masonry. It contains a sound structural system to withstand earthquake. It offers stiffness in the direction. The construction and application are easy in shear walls. It is situated uniformly to minimize adverse effects of a twist.

Partition Walls: It is suitable for segregating spaces from buildings. The wall is hard and made of brick or stone. It is a framed construction. The partition wall is attached with the floor, ceiling, and walls. It has good strength to bear its own load. It defends against impact. It is durable and strong to support wall fixtures. Partition wall functions as a sound barrier and it has good resistance capacity against fire.

Panel Walls: It is a non-bearing wall among columns or pillars that are supported. The panel is set up with both nails and adhesive. The paneling design choices comprise of rustic, boards, frame. Paneling is done with hardwoods or inexpensive pine. Prior to set up panel walls, the space should be painted.

Faced Walls: It is a wall where masonry facing and backing are attached to make use of common action under load. The installation process is very simple. 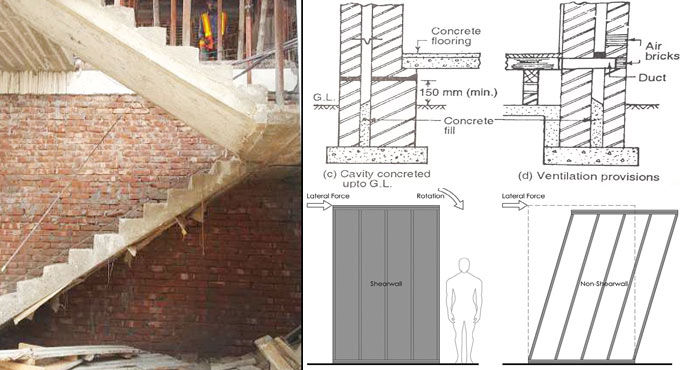