What Are The Different Types Of Walls Used In Building Construction?

What Are The Types Of Walls?

Building construction consists of different kinds of walls. A structural component which divides the room or space into two spaces or rooms along with providing shelter is called a wall.

Walls can be broadly divided into two categories- exterior walls and interior walls.

The walls that provides an enclosure for the home is called the outer walls and the walls which divides the enclosure into the required number of rooms is called the interior walls.

The other word for interior walls is partition walls while exterior walls are also called external walls.

Given below are the different types of walls used in building construction.

Here the walls are one which the construction of the entire building rests instead of the pillars.

Here what usually happens it that the load from the slab is transferred onto the beam, that load then shifts from the beam to the column, and then finally to the foundation.

The non-load-bearing wall is a wall which does not support the ground or roof load above them that means it does not hold or bear any of the construction weight.

The perfect example of such walls are partition walls present inside the building, such walls are constructed only to divide rooms and the purpose of these walls should not have anything to do with structural integrity.

Since these types of walls do not structurally affect a building therefore they can be eliminated or shortened without affecting the structure of the building.

Usually, the thickness of a non-load bearing wall is between 100 mm to 125 mm.

A wall which is built around a lift pit, water pump or ladder to retain soil is called shear wall.

There various pressures which can be expected on shear wall are air pressure, soil pressure or even water pressure.

Lateral forces that are exerted on thestructure as a result of wind, earthquake or any other lateral load is resisted by the shear wall.

To get a better idea, take the example of an overhead water tank.

Since the overhead tank is built at a height therefore it is exposed to air that includes the wind pressure over it.

Due to the presence of water in the water tank a pressure is created as a result of the water pressure inside the tank. This when the shear wall plays its role by resisting these forces without any deflection.

A retaining wall is a wall that is constructed to maintain an uneven level of the floor on its two faces.

To explain even more clearly, a retaining wall is the wall that is built around the plot below the floor so that it can retain soil at one end and also can stop land sliding after the earthwork on site.

RCC or CRS is used to make the retaining walls, while they are further divided into the following types:

When bricks are used to build a wall and masonry is used to join the bricks to the walls it is called a brick masonry wall. The thickness of such walls range from 20 cm or 10 cm.

The 20 cm wall is adopted for exterior walls.

The 10 cm wall is adopted for interior walls.

It must be kept in mind that the length of a brick wall in a single section should not exceed 4 meters, in case it exceeds, then a column must be constructed with RCC.

The course rubble stone masonry walls are the wallsthat are regularly constructed with the shape of stones and are then finished & dressed.

This kind of walls are commonly used for the abutments of bridges, composite walls or boundary walls.

Random rubble walls are the walls which are constructed with irregular shapes of stones and it also has more masonry than the amount used in courted debris stone wall.

From the foundation which has grown to the height of the building the core wall is constructed.

The wall itself works as a column in such kind of walls.Here the core wall is constructed to hold the lateral force that is exerted on the structure as a result of wind, earthquake or any other lateral load.

The core walls are a combination of shear walls. The walls organize and arrange just like a core and then they are installed on the geometric center of the building to decrease the torsional effect.

Just as the name suggests it is a finished wall. This wall is cast in the factory and it is then bought on site for installation.

In place where the space for work is less and also there is a less of labor this kind of walls are preferred.

These are the walls which are built on the top floor of the building to avoid something from falling off the roof. The parapet wall has a height of 3 feet.

Curtain walls are walls which are made of glass, aluminum, or steel frame, it is usually used in offices, hospitals, and other public buildings.

Boundary walls are, as the name suggest, the walls that are constructed across the building to act as the boundary of the plot. 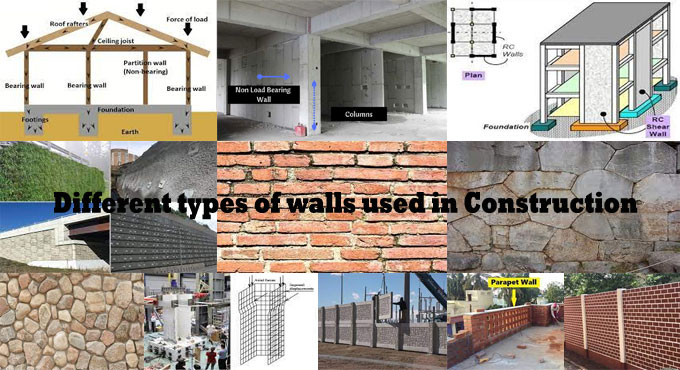