Details about various sections of bridge

All the major elements are arranged within three main bridge areas ? Foundation (that retains the shallow or deep base of the bridge and transmits it?s load to the bearing strata, it comprises of foundations underneath the primary span of the bridge and the abutments underneath starting points of the bridge), Substructure (piers, abutments, spandrels, caps, bearings, and other elements that retains the top part of construction) and Superstructure (all the segments of the bridge which are assembled on top of the supporting substructure system, it comprises of various components like decking, girders, slab, and everything arranged over the main deck like posts, steel truss system, bridge girder, cable-stayed system, cable suspended systems and more).

The followings are the major elements of the modern bridges:

Abutment ? Endpoints of the bridge. They are reinforced to facilitate withstanding extreme lateral pressures.

Pile (also called as beam, footing, and pier) ? It stands for reinforced concrete post that is pushed into the ground to function as the leg or support for the bridge. The extent among piles is worked out to provide support to the rest of the structure that will be placed on top of them.

Cap ? Cap is located on top of the pile beam that gives extra support and distributes the load to the piles underneath. The amalgamation of Pile and Cap elements is known as Bent.

Girder or Span ? It is one of the major components of the bridge that attaches all the Piles beams. It involves several simple spans, a single continuous span that is supported with numerous beams, cantilever spans and cantilever spans with the suspended span among them. They are normally formed with metal or reinforced concrete as well as in the form of haunches girded be bear more load. Girder sections are usually not formed with a simple block of material but built up with truss network (or Orthotropic beams) that enhance their resistance capacity against load. Girders are also utilized as a part of rigid frame network where they are totally attached with frame legs (that may appear as inclined or in V shape).

Deck beam ? Simple continuous decks are created with metal or reinforced concrete. They comprise of sub-components like approach slab (attaches main bridge decking with the ground on both sides of the bridge), expansion joint, drainage scupper, curb, running surface, footpath.

Barriers ? These are the sides of the bridge decks normally contain extra barrier components like railings, handrails and ground fixtures.

Arch ? Arches on the bridges are differentiated with the number of hinges they contain (normally among zero or three) which ascertain the volume of stress and load they can bear securely, and the type of material they are built up (solid material, truss system). Arches underneath the bridge are known as spandrel-braced (cantilever) or Trussed deck arch.

Spandrel ? Spandrels belong to the almost triangular space among the main pillar of the bridge and decking. Stone bridges employ filled ?closed? spandrels deck arches, whereas the modern bridges are constructed with metal having open spandrel deck arch configurations. 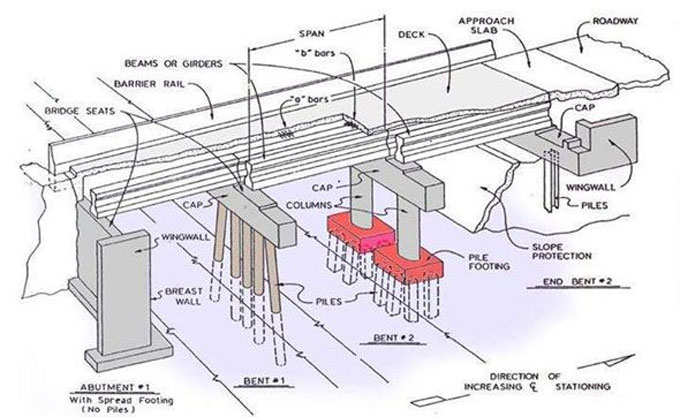