Benefits of vibro compaction for improving the conditions of ground

Particles of granular soil are reorganized by vibration in a manner so that greater density is maintained.

In non cohesive soils (granular soils), the optimal depth of surface compactor and vibratory roller is restricted to a few meters under ground level and large depths can be attained with deep compaction method having depth vibrators. This method is described as Vibro compaction.

Due to Vibro compaction, the occurred settlement may vary from 5% to 15% of the compaction depth based on the original density and the required density. A schematic that demonstrates the step-by-step installation process of Vibro compaction is provided.

If Vibro compaction is utilized for bigger areas, it is usually executed by either a triangular or rectangular grid pattern having probe spacing in the range of 2m to 4m c/c.

The spacing is based on various factors, along with the soil type, backfill type, probe type and energy, and the level of improvement necessary.

For more information, go through the following video tutorial. www.onlinecivilforum.com 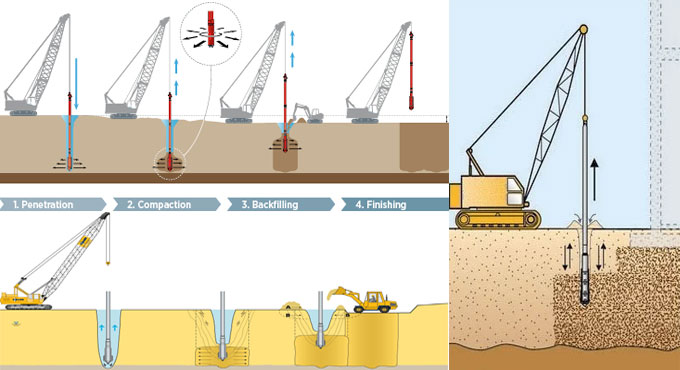