Everything you need to know about Weathering Steel

Weather-resistant steel differs from other corrosion-resistant steel, such as austenitic stainless steel, which resists rust formation. Rusting will occur on the outside surface of weathering steel. Once the exterior layer of rust has developed, rust does not penetrate further into weathering steel. The surface oxide layer functions as a barrier, preventing further corrosion of the steel.

The oxide layer that grows on plain carbon steel is porous and flakes off, allowing a deeper layer to build on the steel. This procedure is continued until the steel is no longer useable. The alloying components guarantee that the first layer of rust that develops sticks considerably better to the steel as it weathers, preventing the rust from entering deeper and weakening the steel. This protective oxide layer avoids the requirement for weathering steel to be coated.

A few benefits of Weathering Steel

Weathering steel offers significant advantages over other metals for structures exposed to the elements:-

1. The only maintenance required should be periodic examination and cleaning to ensure the structure continues to work effectively. Weathering steel is appropriate for bridges and other structures with difficult or dangerous access and where future interruption must be kept to a minimum.

2. The economic savings from removing any protective paint system may exceed the extra material expenses. For example, the cost of weathering steel has been shown to be approximately a few percent lower than conventional painted steel alternatives in bridges.

4. Because both shop and on-site painting activities are avoided, overall construction time is lowered.

5. Weathering steel can reduce the oxidation loss in the steel at temperatures above four hundred degrees Celsius. Even without water, a patina forms at these temperatures. The exact performance improvement is determined by the heating cycle and the environment.

In various Circumstances, this Weathering Steel can be used

Weathering steel is frequently used for exposed steel constructions because it outlasts ordinary carbon steel in the outdoors. This avoids the need to repaint and recoat the steel on a regular basis. Building and bridge construction are two examples. The anti-rust coating inhibits corrosion to the point that, by the time the level of deterioration is unknown, the component has already outlived its intended life for other causes.

Weathering steel should not be utilized in some situations since the corrosion resistance cannot sustain the circumstances. 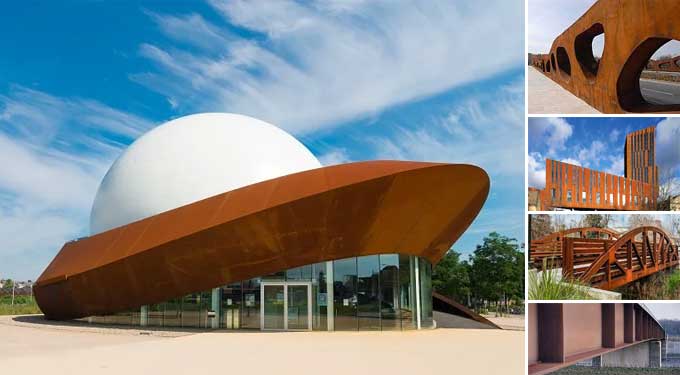