Mat Foundation Structural Guide and its Uses: A Takeaway for You

The footing area needs to increase due to the increased axial loads on the structure or due to poor ground conditions. With increasing footing dimensions, the overlapping of the stress bulbs creates weak zones. As a result, we chose the raft foundation.

Raft or mat foundations provide support for the superstructure by carrying the entire load and dispersing it over a large area beneath the building. In addition to providing differential settlement control, it is one of several shallow foundations.

1. To achieve a uniform and flat surface, dig out the dirt and excavate the soil. A ramming process uses to compact the soil. Once that has been completed, a waterproof plastic sheet layer over the top.

2. After pouring a layer of cement concrete around 7 cm thick to create a perfectly level and flat foundation. Reinforce the foundation bed with spacers. You can use steel mesh reinforcements on both sides of the foundation. The foundation is reinforced with two meshes at the top and bottom to balance upwards and downwards bending forces.

3. A small building's concrete is usually poured up to a specified thickness after the steel has been erected from 200mm to 300mm. That can get much thicker if heavy loads are to carry. Rebar covers should maintain at a minimum of 50mm. A suitable curing regime should ensure concrete reaches the desired compression strength.

The flat plate or projections from the flat plate cannot bear any further increase of axial column load. The foundation reinforces with beams. The beams reduce the thickness of the raft slab significantly.

Flat Plate Foundation (Above & Under)

Flat plates reduce the load applied on a mat foundation. Both the projection above and the projection below the flat plate are the same. It is much easier to build a projection above the raft's surface. Nevertheless, you can only do this if the raft slab is non-usable or if the remaining spacing is adequate for the purpose.

The increase of axial column loads increases bend and shear reinforcements. Construction costs rise as a result. Further, beyond a certain point, the mat foundation has to be thicker.

It is not economical to add thickness to the whole mat foundation. As a result, we thicken the mat foundation beneath the columns. However, construction might prove problematic because the projection is below the flat plate. A lot of work will require installing the reinforcement, waterproofing, etc.

When compared to a conventional strip or trench footing, the mat foundation spreads beneath the footprint of a building and reduces contact pressure. 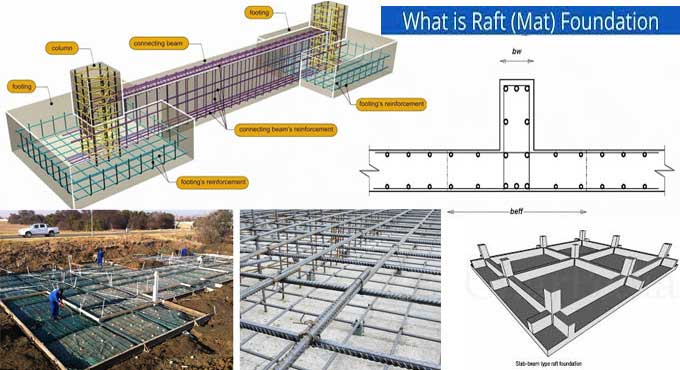