Massive boulders, larger than 150 mm in diameter, are mixed with wet concrete up to 30% of the total volume in mass concrete foundations. This is the case with plum concrete, which is cost-effective and energy-efficient.

Concrete must be poured into a thick layer of well-shaped and scrubbed wet concrete, followed by the placing of angular rock pieces not to exceed 60% of the thickness of the layer, at a distance of at least 1.5 times the largest aggregate size in the concrete.

Under the foundation and footings, the required surface level is achieved using plum concrete. PCC with a large thickness can be less expensive if it is rolled thin.

Gravity dams, barrier walls, sloping sides, and gravity slopes are all examples of mass concreting use. As an example, when it comes to residential construction, the slope underneath the footing is too steep, thus plum concrete must be used.

Laborers can easily lift the boulders, which are not too big or too small, but are boulders the size of about 300 mm.

Cleaning and leveling the surface is the very first step in the process, as soft soil can lead to a low bearing capacity. The surface is sprayed with water after clearing and grubbing to allow it to become moist before plum concrete is laid.

Sprinkled water ensures plum concrete is properly bonded to the ground. An anti-termite compound is sprayed on top of plain water to ensure a solid foundation.

A pump has been used to spread concrete over each layer of boulders rather than leaving gaps between them. Concrete gradually permeates the spaces between the boulders as the concrete slowly percolates.

After the concrete has been poured, boulders must be thrown into it to bind it properly. Once the desired level surface is reached, the process must be repeated.

A minimum of seven days should be allowed for curing. The area of plum concrete is covered with jute bags to hold in moisture for as long as possible after curing.

1. Under normal circumstances, a plum concreter is used as a footing base to prevent water from soaking into the ground.

2. Concrete dams and bridge piers, for example, are examples of areas that can benefit from Plum Concrete.

3. The stones are roughly 150 millimeters in size and act as coarse aggregates to mix the concrete in these cases.

4. Construction of an original dam used plum concrete made with 150 mm plums and 177 Kg/m3 of effective cement content.

5. The high-speed mixers of modern times were capable of mixing a more cohesive concrete mix of 150 MSA very easily when using state-of-the-art mixers.

6. The hard stratum can be found 3 m below the bottom level of a foundation pit for a machine.

7. On the other hand, in a different case, suppose that a certain thickness is suggested for the pit for a machine bed.

8. A 1.5 m foundation depth for the bed was suggested in the layout.

9. Since the foundation must be resting on the hard strata of soil, a thin layer of concrete with stones between 80mm and 100mm in size will be poured and rammed up to 1.5 m; a conventional raft could then be poured and footings placed upon.

• Construction work, in general, uses Plain Cement Concrete as a base. This simple combination of cement, water, fine aggregates, coarse aggregates, and water is called P.C.C.
• This layer protects the RCC above from absorbing water so that it does not wash into the earth below.
• RCC footing shouldn't absorb moisture from the soil, which would cause the reinforcement to be corrected.
• Aided in setting out the structure above in an easy manner by providing a base for the concrete. 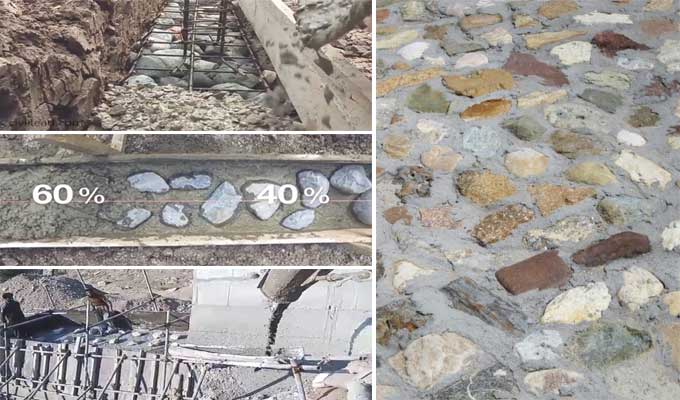