Why reinforcement is provided in a column

Temperature stresses are formed in Concrete because of differences in weather. Cracks may happen for this stress. To get rid of the issue and reduce cracks, some steel is provided at the face of the concrete.

Columns specifically slender columns are prone to lateral loads and moments. Sometimes, tensile stress may also build up particularly in columns at exterior boundary of the building. Steel can deal with this tensile stress.

While making the design of RCC structures, the reinforcement is provided in beams to tie them securely with beams.

Reinforcement is provided so that the size of the columns is not increased.

Reinforcement steel improves the ductility of the member so that the structure gets the ability to withstand earthquake in a superior way.

In R.C.C. columns, less area is required with regards to a plain concrete column It is found that steel can bear load m-times that of concrete of the similar area. To deal with a specific load, the section of an R.C.C. column will be much finer as compared to that of plain concrete. By applying R.?.?. columns, huge space is saved since the size of the column will be less.

A minimum area of steel should be arranged in the column if any case it is necessary for bearing load or not. It is performed to withstand tensile stresses which occur because of eccentricity of loads.

Two types of reinforcements are arranged in a R.C.C. column.

i. To distribute the compressive loads along with concrete, consequently minimizing the size of the column on the whole and parting more usable area.
ii. To withstand tensile stresses which are formed because of any moment or accidental eccentricity.
iii. To yield ductility to the column.
iv. To lessen the impact of creep and shrinkage because of continuous constant loading applied for a long time.

Transverse Reinforcement: The transverse reinforcement is arranged along the lateral direction of the column in the shape of ties spirals which cover the main steel. The function of transverse steel are as following -

i. To retain the longitudinal bars in exact place.
ii. To resist buckling of the main longitudinal bars.
iii. To avoid diagonal tension that happens because of transverse shear formed due to any moment or load.
iv. To yield ductility to the column.
v. To resist longitudinal splitting or bulging from concrete by enclosing it in the core. 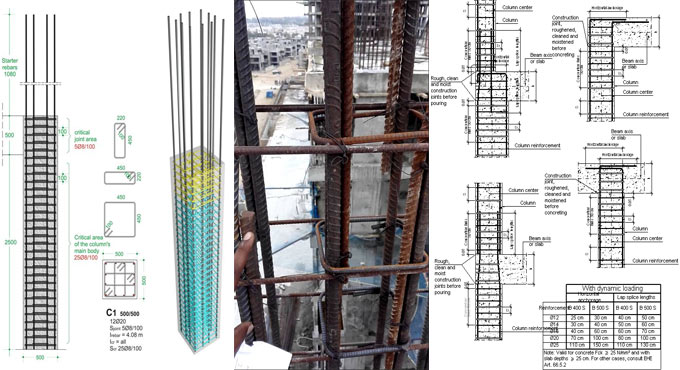