Construction is always a heavy task that includes a complex set of tasks that need to be taken care of keeping each other in mind. Given that the tasks are of such huge magnitude it is evident that there will be some short comings at the end of each task.

Plumbing is one such task. Plumbing is done to provide access to water at a construction and is a humongous task that needs proper planning and skillful execution.

Lack of sufficient venting may prevent proper flow hence failing to quickly take away water from fixtures. In plumbing vent should properly allow for air to flow but not allow the bad odor to get out. Venting designs consists of stacks extending to the roof which discharge the undesirable odor without causing a nuisance.

Some useful tips to measure loads on column, beam and slab

Backflow implies the flowing of water opposite to the desired direction in a pipe and may happen due to reduction in upstream pressure or due to increase in downstream pressure. Any device or building system providing pressurized water develops a cross-connection, and automatic sprinkler systems. As cross connections can’t be removed, they should be supported with backflow preventers. They include different components like check valves, vacuum breakers and detector assemblies.

Along with plumbing, electrical lines are also present in a building. Unless vents and pipes have been properly insulated, a risk of electrocution via faucets remain.

While laying down a plumbing system, if proper care in not administered, debris from the construction may enter into the pipes and clog them. It’s a hectic job to unclog installed pipes hence proper precautions must be taken.

The immediate consequence of clogged pipes is blocked drains which may happen due to presence of debris and others. If not taken care of, it may get infected and become a health hazard.

A sump pump is a hole created in the lowest part of the building. to filter out water through an intricate system of pipes, preventing it from reaching the foundation of the building. If it fails, the lower part of a building may get flooded damaging the structural integrity of the building. 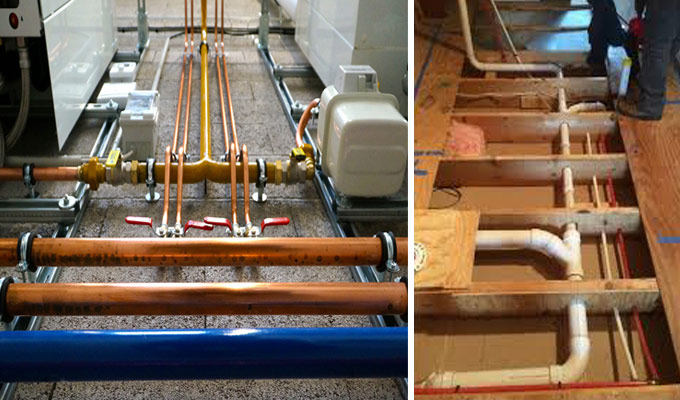